Over recent years, new frameworks, libraries and languages have found their way onto the tech scene and have struggled to gather mainstream adoption, but a recent piece of tech that has seen huge adoption by software engineering teams over a short period is GraphQL. Released by Facebook in 2015, it has been implemented in multiple programming languages and has led to the creation of several GraphQL related frameworks and libraries.

GraphQL is a strongly typed query language for APIs and a runtime for fulfilling queries with existing data. It allows clients to query for many resources in a single request by requesting required fields instead of making requests to multiple endpoints.

Apollo Server is an open-source GraphQL server that provides an easy way to build a GraphQL API that can use data from multiple sources, including several databases and even REST APIs.

In this tutorial, we will learn how to build and deploy a GraphQL server connected to a MongoDB data source. At the end of this tutorial, you will have built a functional GraphQL API using Apollo Server and MongoDB Atlas and deployed it to production on Koyeb.

To successfully follow this tutorial, you need the following:

The steps to creating a GraphQL API with Apollo DataSource and MongoDB Atlas and deploying it to production on Koyeb include: 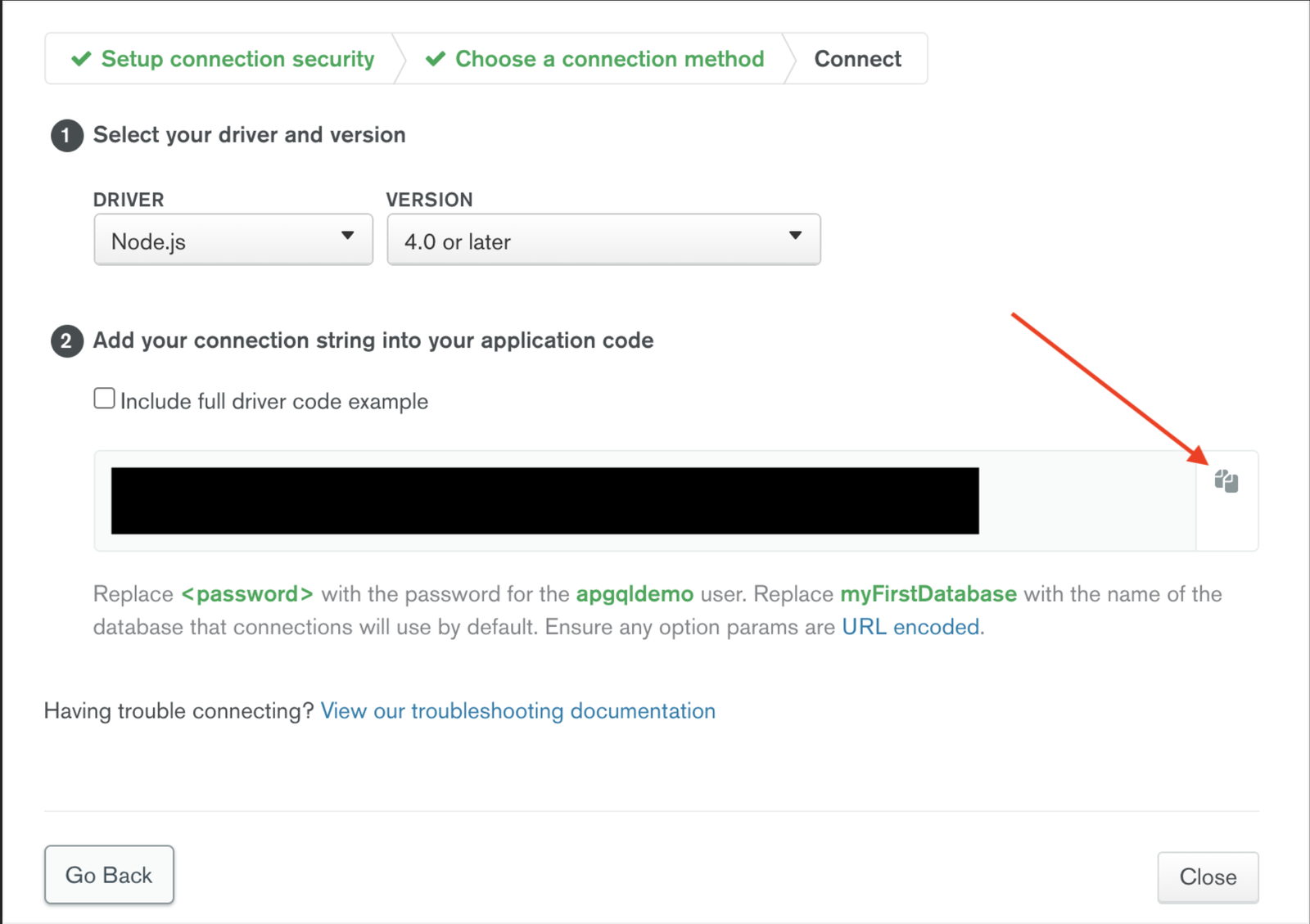 Following the steps above, you have created a MongoDB database to read and store data for the GraphQL API. In the next section, you will set up the project and install the necessary libraries and dependencies.

Set Up the Project

In this section, you will set up an npm project and install the necessary dependencies for building the demo GraphQL server for this tutorial. The GraphQL server will expose a GraphQL API that reads and writes movie data from and to the MongoDB database created in the previous section. Start by creating a root directory for the project on your development machine. To do that, run the command below in your terminal window:

Running the npm init command initializes an empty npm project and creates a package.json file in the root directory. The --yes flag automatically answers "yes" to all the prompts raised by npm.

With an npm project now in place, go ahead and install the libraries and packages required to build the GraphQL API. In your terminal window, run the commands below:

The other libraries installed for development include a host of babel libraries for running and transpiling modern JavaScript code.

Next, create a .babelrc file in the project's root directory and add the following code to the file:

The code above instructs Babel on how to transpile the latest JavaScript code present in the app using Babel's env configuration options.

Lastly, create an src folder in the project's root directory. This src folder will house all the project files. With these changes, the project structure is in place, and in the next section, you will create a GraphQL server using the Apollo Server library.

To create a schema for the GraphQL server, create a typeDefs.js file in the src folder and add the following code to the file:

In addition, the Mutation type includes a createMovie field that accepts a title, rating and a year argument and returns a Movie type object. These fields represent the queries and mutations accepted by the GraphQL server.

When the queries and mutations in the root types are executed, GraphQL expects their respective resolver functions to fetch and return data corresponding with the schema return type. To add resolver functions, create a resolvers.js file in the src directory and add the following code to the file:

The schema and resolvers created need to be connected to a server to become functional. In the src directory, create an index.js file and add the following piece of code to the file:

The code above imports and creates an instance of the Apollo Server. The schema (typeDefs) and resolvers are also imported into the file and passed to the Apollo Server instance. Finally, Apollo Server's listen method launches the webserver on the provided port or port 4000 if no port is provided.

To run the server, add the script below to the package.json file located at the root directory:

The start:dev script above runs the code in the src/index.js file using the babel-node package. To run the script, run the command below in your terminal window:

The command above starts the webserver, which runs on port 4000. Running the command should return the response below:

To see the Apollo Server landing page, visit http://localhost:4000/ in your browser. You should see a page like the one below: 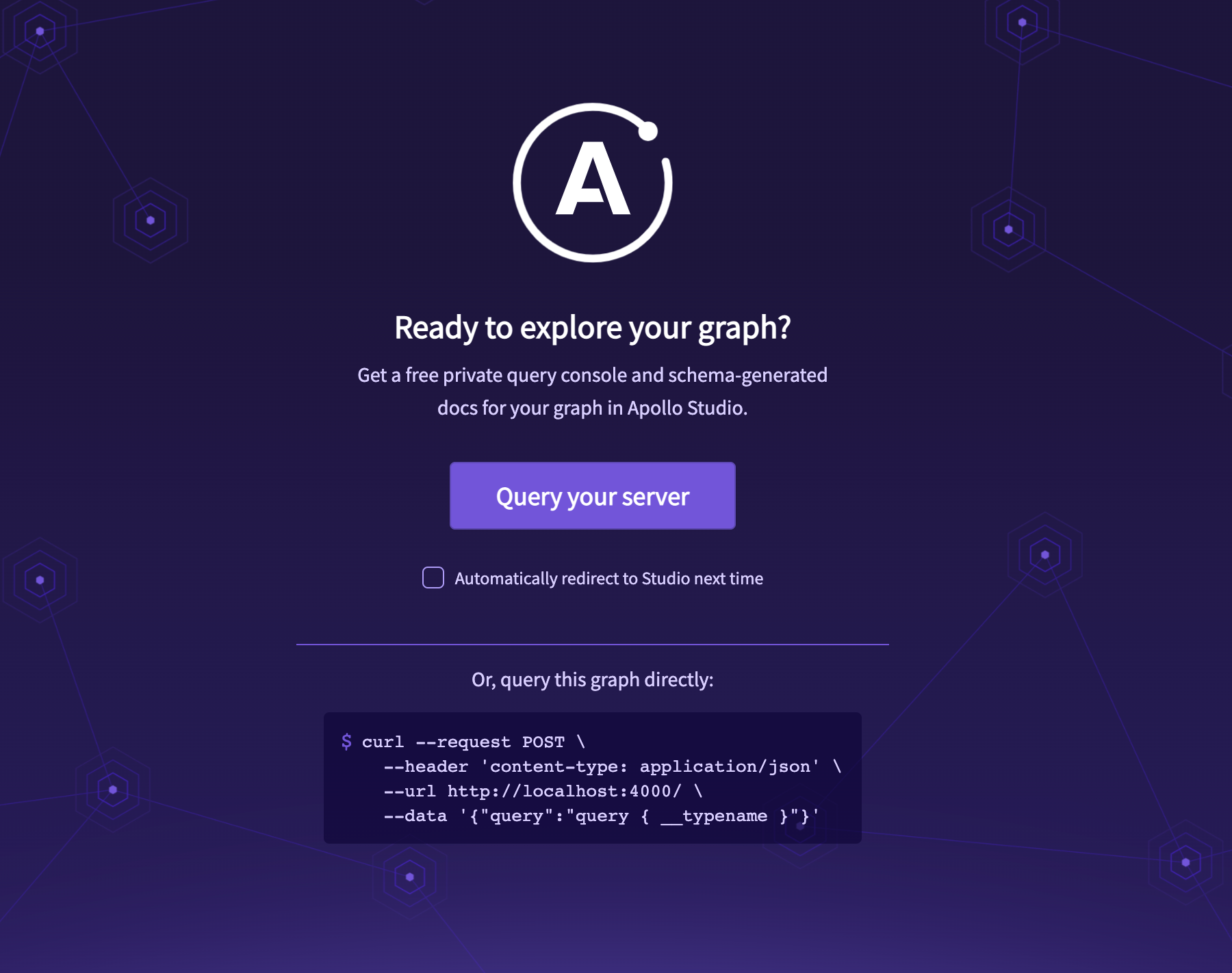 On the landing page, click the "Query your server" button to be redirected to the in-browser sandbox. You should see a page like the one below, with a pre-filled GraphQL query:

The sandbox consists of three panels; the left panel displays the schema of the GraphQL API with available queries and mutations, the middle panel is for writing and executing queries, and the right panel is for viewing query results. Replace the query in your sandbox with the code below:

The code above adds extra fields to the ExampleQuery query. To execute the query, click the "ExampleQuery" button to run the query. You should see the response in the right panel.

Connect the GraphQL Server to the Mongo Database

First, create a .env file in the root directory of the project and add the following code to the file where <username> and <password> represent your MongoDB database user and its password:

The code above makes your MongoDB database connection string available as an environment variable. The .env file should not be committed to git as it contains secret data.

Next, replace the code in the src/index.js file with the following:

The code above imports the dotenv config and mongoose package into the index.js file. Importing the dotenv config makes the environment variables in the .env file accessible via the process.env object. The value of the MONGODB_URI environment variable is accessed via the process.env and stored in a uri variable, and an async function main is declared to create a connection to the MongoDB database using the mongoose connect function and the uri connection string. The main() function is then called to open a connection to the MongoDB database.

Lastly, create a models folder in the src folder and inside it, create a movie.js file. Add the code below to the file:

Use MongoDB as a GraphQL Data Source

The current data source for the GraphQL server is a hard-coded array, and in this section, you will replace it with your MongoDB database. To do that, start by creating a dataSources folder in the src folder. In the dataSources folder, create a movies.js file and add the following code to the file:

The code above declares a Movies data source class that extends the MongoDataSource class provided by the apollo-datasource-mongodb package. The Movies data source contains three methods for each of the existing queries and mutation. The getMovies and createMovie methods use the movie model created in the previous section to read and insert data into the MongoDB database, and the getMovie method uses the findOneById method provided by the MongoDataSource class to fetch a document from the MongoDB collection that matches the provided id argument.

Next, replace the code in the src/index.js file with the code below:

In the updated code above, the Movies data source instance passed to Apollo Server in the src/index.js file is available in the resolver functions via the dataSources property of the shared context object. Each resolver function calls its respective method in the data source to carry out the specified operation on the MongoDB database.

Any query made at this point will return an empty result as the MongoDB database is currently empty. Restart your server, then visit your Mongo Atlas account in your browser. On your MongoDB "Database Deployments" page, select your database cluster and click the "Collections" tab. On the "Collections" tab, click the "INSERT DOCUMENT" button and add as many movie documents as you want.

The first step towards deploying the GraphQL server on Koyeb is to add the npm scripts needed to build the code in production. Add the following scripts below to your package.json file:

The three npm scripts added above include:

Next, create a GitHub repository for your GraphQL server, then run the commands below in your terminal window:

On your Koyeb control panel, go to the Secrets tab and create a new secret. Enter MONGODB_URI as the secret name and your MongoDB connection string as the value. Next, go to the Overview tab and click the `Create App" button to start the app creation process.

On the app creation page:

While creating the app, the run and build command options were skipped as the Koyeb platform can detect the build and start scripts in the package.json file and execute them automatically. Clicking the "Create App" button redirects you to the deployment page, where you can monitor the app deployment process. Once the deployment is complete and all necessary health checks have passed, you can access your public URL.

Using your favorite API testing tool or this online GraphiQL playground, make a getMovies GraphQL query to your public URL. You should get a response of all movie documents on your MongoDB database. 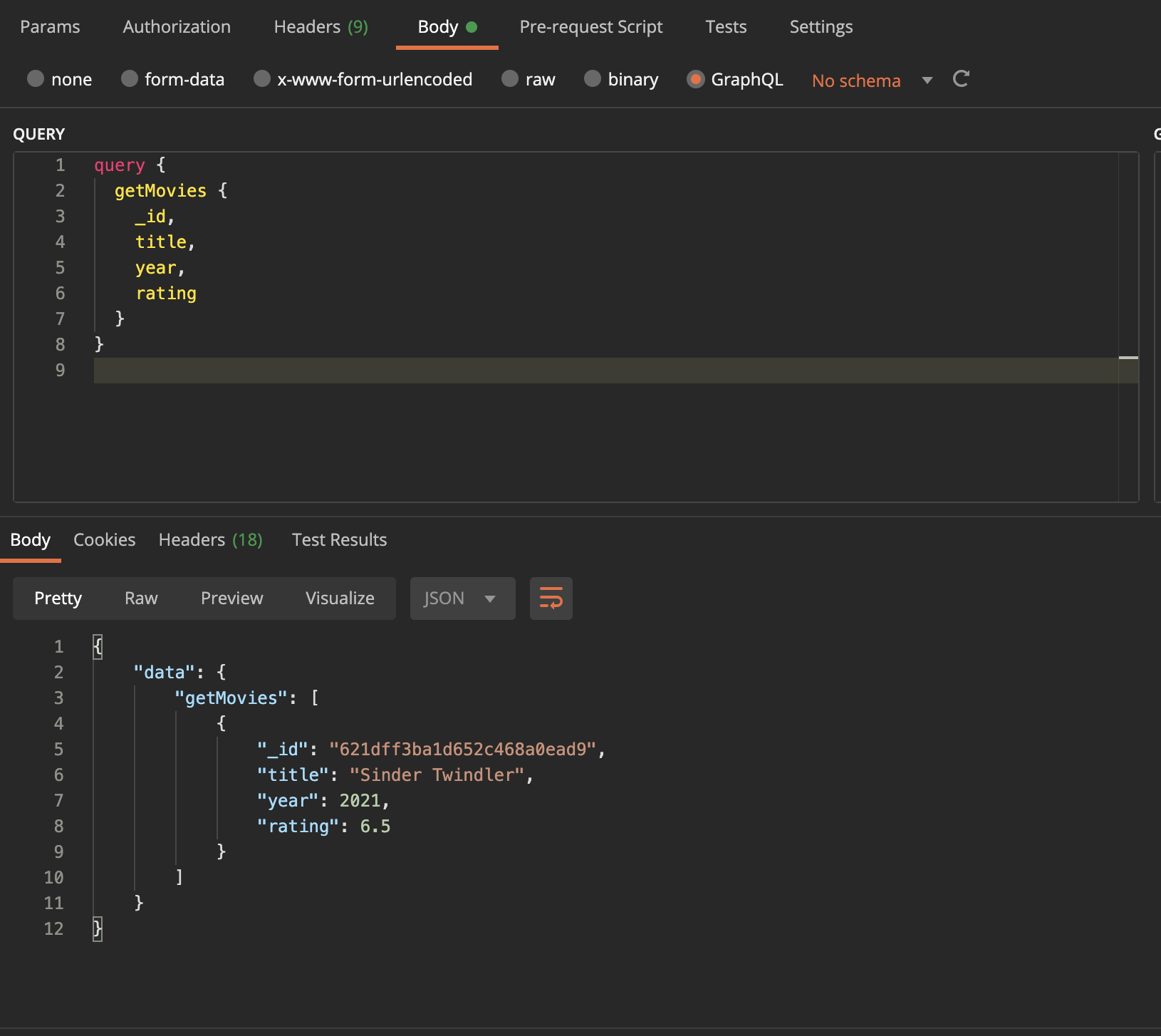 That's it! You have successfully created and deployed a GraphQL server with Apollo Server and a MongoDB data source to Koyeb. Feel free to add more queries and mutations to your GraphQL server. Since we deployed to Koyeb using git-driven deployment, a new build will be automatically triggered and deployed on Koyeb whenever you push your changes to your GitHub repository.

Your changes will go live as soon as your deployment passes all necessary health checks. In case of a failure during deployment, Koyeb maintains the latest working deployment in production to ensure your application is always up and running.

By deploying on Koyeb, our application benefits from native global load balancing, autoscaling, autohealing, and auto HTTPS (SSL) encryption with zero configuration on our part.

If you would like to look at the code for the demo application, you can find it here.

Koyeb is a developer-friendly serverless platform to deploy any apps globally.

Start for free, pay as you grow

Deploy your first app in no time

Get up and running in 5 minutes